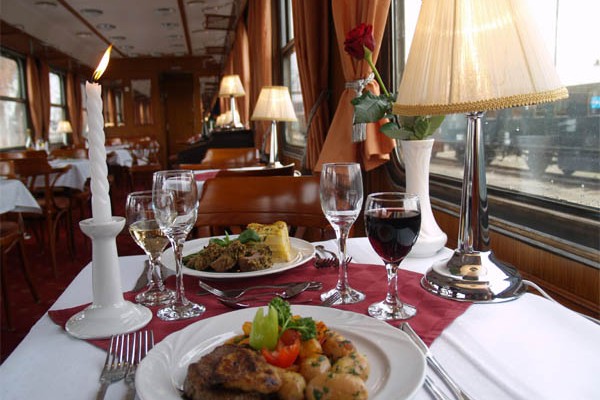 On 19 February, on the eve of Gluttonous Thursday, the guests of Candle Lit Express can enjoy a two-hour gastronomic experience in historic ambience in the restaurant carriages of the train.

In 2015 Hungarian Tourism Ltd will be launching its gastronomical campaign called Gluttonous Thursday again on 19 February, and the dining carriages of the Candle Lit Express will be part of the programme.

Every participant at the dinner will be able to find a dish to their liking on the menu, even those who do not eat meat at this time of the year. They can choose from a vegetarian menu. The guests can also try our quality champagnes and wines to go with the excellent dishes.

The train carriage that was named after Flórián Albert, the “Emperor”, was renovated by MÁV Nosztalgia in 2014. The Albert carriage is decorated with the portrait and the name of the ‘Legend’ on the outside, while the interior is green and white that calls to mind the football club he used to play for. Inside the carriage there is an exhibition, the “Albert exhibition”, presenting the sports career of the only Hungarian football player who had won the “Golden footballer” and was chosen several times as one of the best in the world’s and in Europe, and he was also the ‘athlete of Hungary’.

The MÁV Nosztalgia Ltd will be expecting the guests in the Royal Waiting Hall in Nyugati Railway Station 45 minutes before the beginning of the dinner. The nostalgia train, which consists of romantic restaurant carriages, will not be leaving platform 9 of the Nyugati Railway Station for the night. For further information visit www.mavnosztalgia.hu.